Just last Thursday the 4th, I had the distinct pleasure of having a great lunch with Janet, my sewing machine friend from Montana who was visiting the Puget Sound region.  What a delight.  We had Thai food, chatted about anything that came to mind, laughed a lot, and had a sewing machine exchange.  I gave her a Singer Rocketeer 503A that I had picked up recently and she gave me a Husqvarna Viking Type 21A: 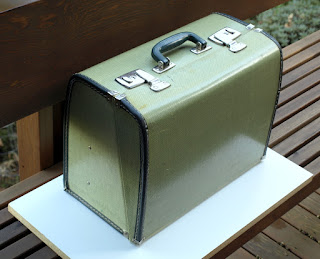 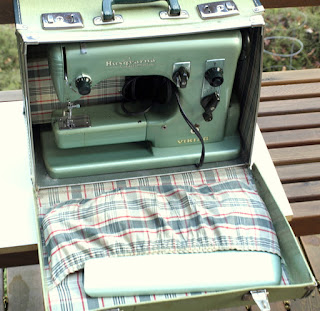 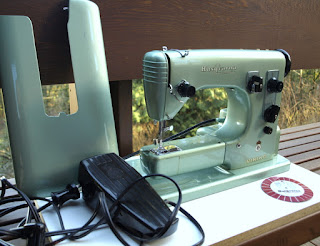 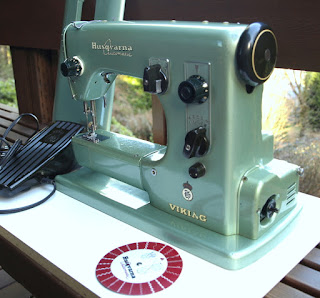 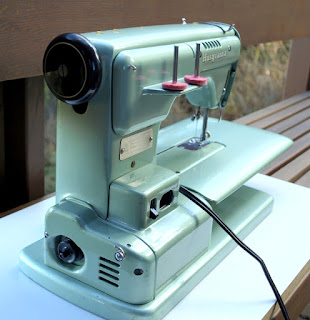 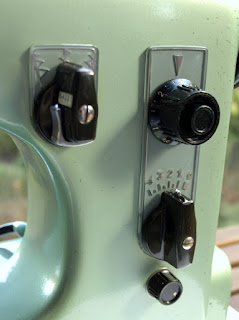 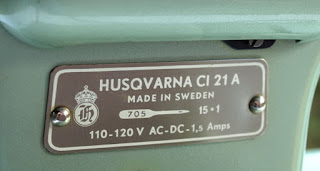 To be honest, I think I got the better end of the deal.

I actually did have a Viking 150 from the 1980s but it was missing a power cord/controller and a proprietary bobbin case and I could never test it, so I re-thrifted it.  Janet is a bit of a mind-reader because this is a model I've wanted for a while but had never found at a reasonable price.  She found this machine at a local Goodwill store.

The machine is smooth, strong, and fast.  At 1.5 amps, it has enough power to sew through multiple layers of heavy material and I've tested it on 8 layers of denim as well as swatches of suede.  It's an excellent stitcher and the machine makes a satisfyingly low humming sound.  The feed is remarkably even and one reason is that the feed dogs are both aggressive and surround the needle in front, rear, and the sides.

One thing I really like about this machine is the size of the free arm: it's narrower than some of the other such machines I own, meaning that it will be my go-to when I need to sew small items or in-the-round such as on a shirt cuff.  The extension is long and is supported by a pop-down leg and has enough curvature that material will easily feed under the needle from below -- again, a better design than the flatter extensions on other machines.

A feature I'm not used to is the permanently engaged bobbin winding mechanism.  Nonetheless, the 'Automatic' moniker probably refers to the disengaged clutch upon insertion of a bobbin on the post for winding.  Once the bobbin is removed, the clutch is then engaged automatically rather than the user having to deal with a clutch knob.

Another interesting design is that this machine takes cams but the cams are akin to small cam stacks rather than individual stitch patterns or pairs of patterns found on so many other machines.  A sliding mechanism on the needle position knob selects stitches 1 - 5 of stacks A, B, or C, whichever of these stacks is inserted into the back of the machine behind the door.  (This machine arrived with stack A.  I will be searching for the other two.)

There's a lot to like here and I love the '50s design, too.  And it's my favorite sewing machine color: green!  As I get to know the machine, I'll continue to write about it.  This is a keeper -- one I'd like to use rather than put on a shelf to admire, pretty though it certainly is.

So thank you once again, Janet.  You found another great machine and I couldn't be happier.